Who will Be Trustee?

The case of the missing FOIPPA request(s)?

The expired UBID Board majority has posted the audited financial report(s), etc. on the Union Bay website. It is obvious the old Board does not want to answer landowner questions. Fine. Let’s move on..

The Inaugural Meeting was May 1 last year..The Inaugural Meeting can be scheduled anytime as the oath of office is simply a formality. Two duly and honorably elected Trustee’s (Healey and Vandenberg) are waiting to work on the building the water treatment plant and finding ways to access grants and cheaper financing for 4.2 million dollar plant! There is no time to waste.

The old board has no right to postpone the AGM and more importantly delay the swearing in of two Trustees who won in a record landslide on April 20, 2019. This is obstruction of justice and electoral tampering, in my humble opinion, but I am not a lawyer. Attorney General David Eby should have the authority to intervene on behalf of us landowners as we 690 households can not afford to hire our own lawyer to ensure a functioning Board. Union Bay deserves better! 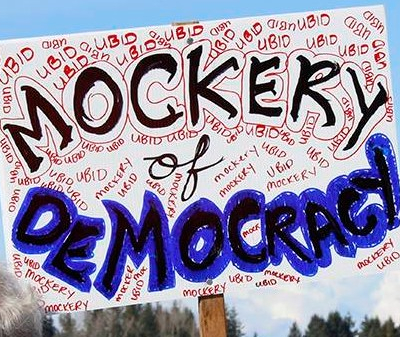 It is not our mess to clean up. Trustees Haraldson and Bitten and former trustees Loxam and Jacques have a responsibility to the landowners and the Provincial Government to hold the AGM by May 1.
Until then the UBID Board is composed of Haraldson, Bitten and Kaljur. Stay Home Tonight!

“The April 23, 2019 COW meeting, where the alleged ‘incident’ leading to cancellation of AGM, had only two sitting trustees present; Trustee Haraldson and myself, Susanna Kaljur.  Trustee Rick Bitten was absent.  Peter Jacques and Glenn Loxam were present, however they are no longer trustees as they were defeated on April 20, 2019.  By rights the meeting with the financial auditor should have occurred before the election. Therefore Ted Haraldson, as only one of two trustees present, had no legal right to cancel either the April 23 COW/Auditor meeting or the April 25 AGM. I fully support Trustee Haraldson’s preference of having a professional Chair chair the AGM. The local governments Act states the AGM must occur before May 1.” This letter was sent to the Ministry of Municipal Affairs Selena Robinson, Ombudsperson, MLA Scott Fraser, UBID Board and others on April 24, 2019.

Here is Trustee Rick Bitten’s response to my letter: “Glen and peter and still elected trustees until the other candidates are sworn in. I believe that UBID should discuss charges with the RCMP. These planned disruptions are intenional (sic) and should be considered as that. I am embarrased by the landowners that create these problems. This behaviour would not be tollarated (sic) any where else why should we accept it.    Trustee Rick Bitten”

This mess is brought to you by 5 men who flout the law. It is theirs to answer for and clean up.

In my opinion the Oath of Office must proceed and a new chair elected so we have a functioning board. The outgoing Board majority are responsible for the AGM not the 2 new trustees. Currently the UBID Board has only 3 sworn trustees: Haraldson, Bitten, Kaljur. The majority has swung because 2 Trustees can not make any decisions. Ergo they (Bitten, Haraldson) can not cancel meetings or do anything.

Hein Vandenberg and Paul Healey win with record numbers. Union Bay has a new Board with a clear focus: to ensure we have access to Infrastructure grants and municipal financing.

UNION BAY, B.C- The exact parcel tax amount that Union Bay residents will pay for their new water treatment plant will be unveiled at the upcoming annual general meeting.

That’s according to the chairperson of the Union Bay Improvement District (UBID), Ted Haraldson.

The district has already put out a press release, indicating that parcel taxes for Union Bay will be going up by $46 in 2020, to a total of $391, in order to pay for the plant.

The total cost of the water treatment plant project is $4.2 million, with the district stating that $700,000 will be contributed from their Public Works Capital Reserve, and another $3.5 getting borrowed and amortized over the next 25 years.

However, the press release does not indicate how much of that $391 will be going towards the water treatment plant costs.

Last week, the MyComoxValleyNow.com newsroom asked Union Bay administrator Gordon Mason for that amount, and whether or not any other services provided by UBID would be financially impacted by the costs of the treatment plant.

At the time, Mason said the information being sought was part of a business case supplied to district trustees “in-camera”.

“This information is considered confidential and has to be approved by the board for release at an in -camera meeting in the near future,” said Mason, in an emailed response.

“I anticipate this happening after the UBID election.”

Asked if the additional $46 would be the only funds going towards the water treatment plant from parcel taxes, or if that hadn’t been determined yet, Mason said he couldn’t release that information until he had board approval.

Reached for comment on Thursday, Haraldson indicated that information would come at the annual general meeting at Union Bay’s community hall on April 25th, 2019. He explained that the information would be part of the audit of UBID that is read at that meeting.

Residents of Union Bay are also going to the polls this weekend to elect two new trustees. The general poll will run from 9:00 a.m. to 6:00 p.m. at the Bill Wood Room at the community hall.

More information on the four candidates and the election’s main issue can be found here: https://www.mycomoxvalleynow.com/52549/union-bay-merger-with-cvrd-looms-large-at-election-forum/

Haraldson also clarified a notice recently posted to the improvement district website, which appeared to be a press release from Union Bay Estates. Haraldson stated that the release had come from the company, and had been sent out in the mail as well.

UBID had posted the notice on behalf of the company.

Your Protest Sign’s called and they want fresh air on Saturday!

Come and join us on the last chance Union Bay has to save some money to build our water treatment plant. Polls are open from 9am to 6pm. Show up with your signs and smile of encouragement to get out and vote!